Are Investors Going to Get Gobbled by Turkey?

Panic hit markets briefly in mid-August as the Turkish lira crashed losing as much as half its value against the U.S. dollar. The concern was that the risk of debt defaults rose that could spread to other countries.

A headline in the express.UK 8/27/2018; "Row with Trump puts the world economy on edge." The article points out that " the Trump administration is targeting a NATO ally as part of an economic war."

Trump War on Turkey
While the economic crisis has been building for years, it came to a head when President Trump imposed sanctions and doubled tariffs on Turkey's steel and aluminum imports over the house arrest of an American pastor, Andrew Brunson, on charges that he aided the failed coup attempt on Erdogan. Treasury Secretary Mnuchin also declared that the U.S. is prepared to implement additional sanctions if Mr. Brunson is not released.

Turkey immediately counterpunched the U.S. tariffs by implementing a series of new tariffs on over 20 U.S. goods including American cars, alcohol and tobacco imports.

President Erdogan also responded defiantly to President Trump. He said: I want them to know that we will not surrender. We will not give in, if you come at us with your dollars then we will find other ways to do business. The US is sacrificing its 81-million strong ally Turkey for a pastor with links to terrorists. Turkey has said that it isn't in favor of an economic war "but staying silent when attacked is out of the question."

Does Turkey present a danger to global finances?
In the U.S. other than tariffs on a small number of goods the risk is small. The most risk is for European banks since there is a large risk of loan defaults. Turkey's GDP is smaller than that of Florida.

According to the Washington Post, dollar-denominated loans in Turkey account for about 30% of the GDP, and loans in euros another 20%. 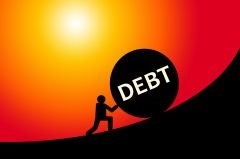 Turkey has $83 billion worth of loans from Spanish banks, $38 billion from French banks, $19 billion from the United Kingdom and $17 billion from Italy. Spain and Italy may require assistance from the European Central Banks if the crisis does not get resolved.

The initial weakness in global stock markets after the attack by Trump rekindled fears of 1997's Asian financial crisis (which began with a collapse of Thailand's currency) or 2011's eurozone debt crisis. However, the financial effect of Turkey's crisis is limited. The political situation may be worse driving Turkey more to Russia (Turkey's recently purchased arms from Russia) and Iran as it fights with the U.S. Trump administration.

Erdogan's anger at Trump has fueled speculation that he might pull Turkey out of NATO and seek more military and financial support from Russia and China.

There is a risk in emerging markets that have large amounts of debt. In Argentina, the peso has fallen around 40% and rivals the Turkish lira as the world's worst performing currency in 2018 if you don't count Venezuela's which is down 99.9%. Argentina's central bank hiked interest rates to 40 percent in May and inflation rose to 31% in June.

Angela Merkel, Germany's chancellor, expressed concern in European capitals that Turkey's problems could spill over into the European Union through losses to Spanish and Italian banks exposed to bad loans.

Turkey's Crisis
With oil prices rising and a strong U.S. dollar, Turkey will need to finance an estimated $1 billion a year, without any help from private capital markets, due to the long-term mismanagement of the economy. Economic policies have become even worse since President Erodogan's son-in-law became the economic czar.

From 112.international 8/20/2018
"Investors are growing more and more skeptical in regards to whether or not the country's government is indeed capable of effectively responding to the crisis, given Erdogan's strive for building up his authority, his willingness to destroy public institutions, his intolerance towards those who criticize him, as well as the fact that the entire economic policy of the republic was delegated to the president's son-in-law.

"The sanctions recently introduced by Erdogan against the United States are likely to hit Turkey itself more, as the trade turnover between the two nations is not significant even though Turkey enjoyed a 30% growth in exports to the United States in 2017.

"People in Turkey are counting on Russia...

"The country's credit rating is now worse than that of Greece, while the bonds issued by large banks now promise a 20% return.

"However, Erdogan is trying to play the situation to his advantage by reinforcing the nationalist rhetoric. The media showed photographs of people gathering in lines at currency exchange offices, where they were bringing their dollars to, some burnt their dollars for the camera. But this is more like propaganda than a mirror of reality.

"Erdogan is apparently going to divert the public eye away from the economic problems with a small war. Recently he announced that Turkey is about to finish preparing for a new operation in Syria."

Military concerns
From the Businessinsider 8/13/2018
Turkey may not be important economically in terms of contagion to the rest of the global economy but it sure is important strategically and militarily. Turkey is the bridge between the democratic, peaceful West and the war-ridden dictatorships of the East.

Turkey is the thing that has physically prevented the Islamic State terrorist group from rolling into Greece. It keeps the Syrian war inside Syria. It prevents the Russians from rolling back into Bulgaria. And it deters the Iraqis, Iranians, and Kurds from escalating their various conflicts northward into Europe. Turkey has the largest standing army in Europe. We need Turkey to be strong and stable.

"US sanctions have annoyed Turkish President Recep Tayyip Erdogan, who says he is now in search of new friends.

"The worst-case scenario for the West? Potential 'new friends' include Iran, Syria, and Russia -Turkey's neighbors- who also suffer from US sanctions."

The central banks of Qatar and Turkey have signed a currency swap agreement to provide liquidity. This doesn't reduce debt but provides Turkey reserves in Qatar's Rial currency instead of needing $US. This has been described as a "drop in the bucket" that is too small to be very effective.

Oil-rich Qatar hosts a U.S. military base and has invested heavily in the U.S. economy. However, relationships have become unstable under President Trump.

After Saudi Arabia, the United Arab Emirates, Bahrain, and Egypt cut diplomatic ties with Qatar last year, accusing the country of funding terrorism and destabilizing the region, Trump tweeted on June 9, 2017, his support of their blockade of Qatar. On the same day, Secretary of State Tillerson called on Gulf states to ease the blockade.

Turkey finding support from Britain and the EU against the Trump Trade War.
8/27/2018 British and Turkish finance chiefs are set to meet imminently with European opposition to Donald Trump's staunch global trade strategy. The arrangement appears to show Turkey is hoping Britain can mediate between nations, and Turkey wants to significantly improve relations with the European Union and increase trade with France.

"The two countries shared the same position against the decisions taken by the US on trade and investment in Iran following Donald Trump's decision to withdraw from the 2015 nuclear deal in May, and that EU allies will take joint steps to fight this.

"Last week, it was reported the EU is confident Turkey's escalating row with the US will bring it closer to Brussels and strengthen its position in fighting back against Mr. Trump. The latest improvement in relations prompted European Commission President Jean-Claude-Junker to make some of the warmest remarks about Recep Tayyip Erdogan's Government in recent months. He said: 'Turkey has nothing to fear from its European neighbors. We want to see a democratic, stable and prosperous Turkey.'"
Source: Express.co.uk

Conclusion
The Turkey risk seems at this point limited to some European banks and to a small extent to US exporters of certain products.  The real risk is the trade war Trump has started with China and the EU.  These are a far greater risk to some US companies than the Turkey crisis.   See Dave's separate report on the China trade war.